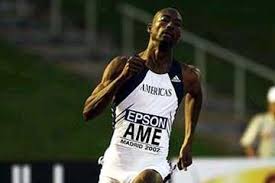 3x Olympian. Former world No.1 400m sprinter. World and CommonWealth Games champion.
3x IAAF Grand Prix final's winner. In 2002 coach Blackwood was awarded the prestigious Jamaica's sports man of the year award. In 2000 coach Blackwood set the Big 12 NCAA conference record in the 400m which is still standing today!
​
Coach Blackwood represented team Jamaica in three Olympic games and seven World championships including the commonwealth games. He competed in the (2000, 2004, 2008) Olympic Games. During his 2002 track and field season, coach Blackwood was ranked No. 1 in the world by IAAF in the 400 meters. Blackwood is an alumnus of the university of Oklahoma. He coached at the University of Oklahoma (As student assistant coach under head coach Rodney Price) coach Blackwood is currently working at Williams preparatory in Dallas as a physical education teacher. He is happily married to his lovely wife Tiffany and father of three wonderful kids Kody, Kavion and Ke'lani Blackwood. 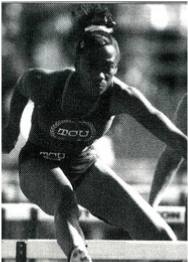 Coach Chessna Davis
Former Texas 5A 100m hurdles State UIL & Texas Relays Champion, TCU collegiate, indoor record holder. Davis, who was an all-around athlete gaining honors in both varsity level Volleyball and Basketball while at The Colony HS, eventually went on to earn a full track and field scholarship to Texas Christian University in 1995. She gained a wealth of track and field experience and national level exposure during her 10-year career as an elite athlete participating on the Junior Olympic, TAAF/USATF, & Texas Christian University track teams. Davis, who still holds a TAAF summer track State Record in the 100m hurdles set in 1993, continued breaking and setting all-time records during her collegiate career at TCU. Her passion for coaching developed in 1996 during her Freshman year in college, when she helped coach summer track with the Prime Time track club out of Flower Mound, TX. Upon graduating from TCU, Chessna worked 3 years as a coach at the Colony High feeder school, Lakeview MS, before establishing Prime Time Elite Track Club and moving into private coaching in the city of Frisco where she now resides with her son Cosstyn. After returning to her high school Alma Mater from 2011-14 as an assistant Track coach to work with the girls & boys hurdles/sprints, Coach Davis returned to the public school, coaching sector in 2015 in Plano ISD, before moving to Coppell ISD in 2016 as a Track coach where she has continuously helped develop numerous, 6-A, District Champions, Regional Finalist, and Track scholarship recipient athletes on both the Men’s and Women’s sides. 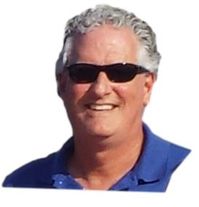 Coach Jeff Kirk
​Coach Kirk was a 4 year letterman in college and is an alumni of the 1977 Southwest Conference Championship team at the University of Texas as a hurdler. Coach Kirk has been developing track and field athletes for 7 years with Mercury Track Club in Coppell. His athletes have won numerous state TAAF championships as well as having coached a USATF Youth Champion and a UIL 400M champion. Coach Kirk has a lifelong love of the sport of Track & Field and is supported by his wife and three daughters. 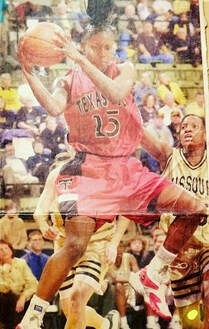 Coach Aleah Johnson
Former participant/medal/letter winner during 1993-1996 high school season at Texas Relays, UIL State 4A/5A 100m hurdles, Triple, long jump and sprint relays. Basketball letter winner at Texas Tech, South Plains College, Newman Smith and Leander High School. After college basketball career. I was blessed to continue my basketball career in Europe’s professional league for 2 years. Coach Johnson returned after a few injuries to heal for the last time and start her coaching career. Blessed to be pregnant with her 1 and only child, during her first year as a coach. Beautiful, talented dancer, passionate athletic daughter was God's plan. She is the reason the coach continues with the passion heart and determination daily. Turning 16 soon, working hard to come back strong from a basketball injury; torn ACL. Coaching and teaching has been a passion as far back as 2nd grade for Coach Johnson. An amazing 2nd grade teacher who still remains in her memory. Planted the seed of being an educator. God's plan is coming to fruition slowly. While in college, working camps, personal lessons and coaching throughout the years keeps Johnson going and passionate about mentoring young athletes on and off the field/court. Overcoming a brain tumor and remaining strong through other health misdiagnosis. Has left me with the tools to educate kids, teens who need that extra help to become a better person as well as athlete. Ensuring passion, heart, determination and faith is taught and learned. Now you have the heart, passion and determination that will come right along to carry you to determination. With a complete relay, the race will be easy breezy. Aleah’s coaching experience expands over 10 years. Lubbock ISD, Carrollton Farmers Branch ISD, Slaton ISD as well as various AAU basketball and personal skills coach. Now, Living in the city of Grapevine, TX with her daughter Kennadi. Coach Johnson returned to education in 2017 in Slaton ISD.